I post drawings, poetry, comics, and more on my Twitter, Instagram, and art Tumblr. They're good places to stay updated, despite the occasional rambles about cereal mascots, video game characters, and cartoons.

I make a series of poetry and comics zines called Keysmash. You can find them all available for pay-what-you-want here.

I made an animated series pitch called  Pigbog's Kingdom, which you can find more info about here!

I also made an animated short film called Shoes, which you can watch here. More Himbo content here.

I run a Twitter account called Daily Band Names that posts band names every day. It's the worst. 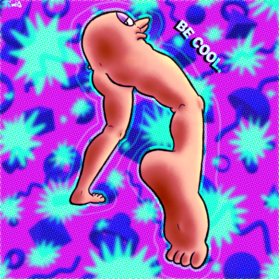 On December 28th, 1997, Tucker Lane Wooley sprung from the proverbial fire in San Francisco, California. Eight months later, he and his parental units moved to Los Angeles, where he remains languishing in the very not proverbial heat to this day. Tucker graduated Otis College of Art and Design in 2021, majoring in Animation and minoring in Creative Writing. He makes zines, runs the Twitter account Daily Band Names, and does
a bunch of other stuff. He's trying his best.

Here's some information about stuff I've made!